Construction has long been viewed as male-centric and decidedly unfriendly to females. But, at a time when the industry is growing and instantaneously facing a skill shortage, huge efforts need to be made to support women joining the construction industry. Changing the stereotypes associated with construction workers and giving women new opportunities to look at to build their careers are the first steps towards a positive outcome. 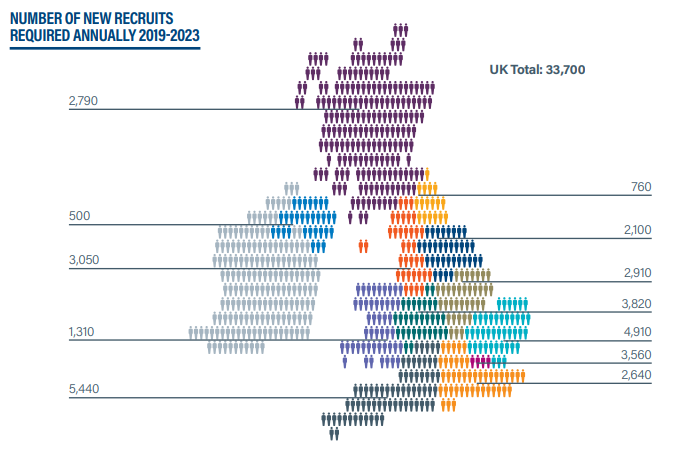 What percentage of construction workers are female?

According to Go Construct Statistics women remain under-represented in the trade professions with data indicating that women in construction only make up 14% of all jobs – a number that has remained relatively stagnant since the 90s.

There are several factors for this, including:

Men have historically made up the vast majority of the trade workforce, and this is still being reflected in the working environment today. Take for example toilet facilities. Some sights are yet to provide female toilets, in addition to using male-orientated signs – “Warning Men Working Overhead” or “Danger Men at Work”.

As well as on-site factors, the way some jobs are structured means some firms might not offer maternity or flexible working – a key incentive for attracting and retaining women workers.

Benefits of a Diverse Workforce

Although a gender-balanced working environment isn’t a reality in the construction industry just yet, there are numerous reasons we need to work towards it. Performance is a major one, with McKinsey revealing that a more gender-diverse workforce is 25% more likely to achieve above-average profitability. Heavily contributing to this is the fact women and men think differently, so companies can benefit from having fresh outlooks and perspectives to help form strategies.

From a brand perspective, gender diversity will have a positive impact on the company’s reputation by presenting it as a desirable place to work. It also helps to attract top talent from a wide range of pools.

Benefits of Working in Construction

Regardless of industry, women have the potential to earn far more as trade employees than in traditionally female-dominated professions. Totaljobs reports an annual salary of £47,500 for construction workers, compared to just £23,000 for those who hold Administrator positions.

Higher education such as college or university is not for everyone. Instead, learning a trade can be a better way for individuals to get on the career path. It’s a cheaper alternative.

Women in Construction Week 2022 is this week (March 6-12th), so let’s get involved and help pave the way for women in construction.

Types of Drill Bits and Their Uses

We all know a drill is one of your best friends in the workshop or on the job, b  Read Full Story

10 cheap DIYs you can do this summer

Our Second Summer Sale Is Here | Top Super Deals Inside

We use cookies on our website to give you the most relevant experience by remembering your preferences and repeat visits. By clicking “Accept All”, you consent to the use of ALL the cookies. However, you may visit "Cookie Settings" to provide a controlled consent.
Cookie SettingsAccept All
Manage consent

This website uses cookies to improve your experience while you navigate through the website. Out of these, the cookies that are categorized as necessary are stored on your browser as they are essential for the working of basic functionalities of the website. We also use third-party cookies that help us analyze and understand how you use this website. These cookies will be stored in your browser only with your consent. You also have the option to opt-out of these cookies. But opting out of some of these cookies may affect your browsing experience.
Necessary Always Enabled
Necessary cookies are absolutely essential for the website to function properly. These cookies ensure basic functionalities and security features of the website, anonymously.
Functional
Functional cookies help to perform certain functionalities like sharing the content of the website on social media platforms, collect feedbacks, and other third-party features.
Performance
Performance cookies are used to understand and analyze the key performance indexes of the website which helps in delivering a better user experience for the visitors.
Analytics
Analytical cookies are used to understand how visitors interact with the website. These cookies help provide information on metrics the number of visitors, bounce rate, traffic source, etc.
Advertisement
Advertisement cookies are used to provide visitors with relevant ads and marketing campaigns. These cookies track visitors across websites and collect information to provide customized ads.
Others
Other uncategorized cookies are those that are being analyzed and have not been classified into a category as yet.
SAVE & ACCEPT